In Transnationalizing Viet Nam Professor Valverde discusses the relations between Vietnam and its diasporic community. The book forms these connections by exchanging music, having open discussions on transnational “virtual community” called Vietnam Forum (VNForum), exploring ethnic news media and using Chau Huynh’s scandalous artwork as an argument, and a debate over the naming of a business-district in San Jose concerning Vice Mayor Madison Nguyen. The book explores the connections starting from the end of the Vietnam War to 2012, the dependency of communication and globalization forming to stay connected, people from all different, diverse people involved in “transnational processes,” and the relationship between native and diasporic communities by viewing “politics, culture, community, generations, gender relations, technology, news media, and the arts” (2). This forces the rebuilding of both communities and adjusting through the transformation while staying connected. It hasn’t been easy though. Using Vice Mayor Madison Nguyen’s rejection of the business-district name “Little Saigon” as an example shows how Vietnamese Americans are not always united and have torn beliefs. Those who felt strongly against the business-district name “Vietnamese Business District” had strong concerns about Nguyen and even had concerns that Nguyen had some relations with communism. Today we still see the Vietnamese diaspora community in a fragile state as San Jose recently passed a law that the communist flag (the one with the red star) being banned from all government grounds. Question: How can we compromise with Vietnam and its diaspora in its rebuilding without crossing boundaries? 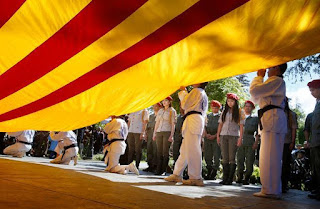 Source: http://www.mercurynews.com/2017/01/23/san-jose-proposal-to-oppose-displaying-flag-of-vietnam-draws-opposition/
Posted by Unknown at 2:30 AM