Week 7
Prabhjit S  Mann
ASA 150
In this week’s reading from the “The War after the War” written by Nayan Chanda, the author highlights how even after the Vietnam was over & the fall of Saigon, it triggered several small wars that were called the Indochina wars. It is interesting to note that both the Soviet’s & Chinese were involved in Vietnam and tried to have their own influence in the region, as the Soviets did in the North & Chinese in the South. After the United States Army fled Vietnam, disputes arose over small islands in the region to who would claim them as their own territory, which involved Vietnam, Cambodia, China Laos or the Soviets. Cambodia, Vietnam, and China suspended much of their internal disputes in order to resist foreign domination during wartime. But once the war was over their rivalry became publicized. There was no more need to be unified, which brought them to battlefield for the self-claimed territory on island territories. The Americans had left & didn’t turn back to look at the region or try to help it grow in the initial years after their defeat. Something that was ironic about the whole Vietnam War was the fact that more than just the United States it was China who lost the Vietnam War, according to Chanda.  After the war ended Vietnam came out as a strong, reunified Vietnam challenging China from the south.  Chanda gives a different perspective as most believed that Vietnam and China were allies with a similar communist goal, but not in a way that China would like.  The power in Indochina came at a time when Peking was obsessed with Soviet “social imperialist”.  This gave China the fear that Moscow, one of Vietnam’s principle supplier of military hardware, would join in the mix of the power vacuum after the United States just left. After Operation Frequent Wind was over the Soviets presence in the south of Vietnam as a way to heighten vigilance “against the dangers of social-imperialist aggression and expansion. From reading these extracts this week something that came up to my mind the connects to the present day situation is the Iraq war as around 2012 the U.S. army decides to pack up and leave the country, after almost of 10 years of war. They just pack up and leave, not realizing they have completed ruined the country killed thousands of people and displaced millions. There was no one left in charge no healing process war started. That led the country vunerable and open for the taking in which ISIS rose. I feel a similar situation had occurred in Vietnam as when the U.S. left, the Chinese & Soviets were trying to control & have their influence in the region.


Question – Would Vietnam been able to rally together as a strong & unified nation if someone was left in power after the end of the war? 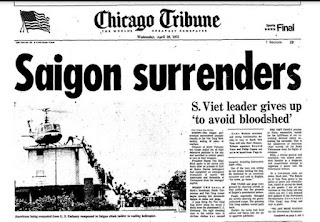