Blog Post #3
Nothing Ever Dies: Vietnam and the Memory of War by Viet Thanh Nguyen compares the experiences of both the Vietnam War and the Korean War providing similarities yet also differences in how both countries have survived the aftermath of such tragedies. With South Korea becoming a booming economy, Vietnam however “lost forty years and fell behind because of the wars against the French and the Americans … Vietnam suffers from capitalist jet-lag, behind the times, striving to become China or (South) Korea or even perhaps Taiwan or Hong Kong... “ (Nguyen 133). However South Korea’s rise to becoming one of the world’s top economies has allowed them to re-narrate their history in a form of weaponized memory. It even allows for distinction between North and South Koreans, for South Koreans have been given the opportunity to become human since they have brought in economic success. Even satellite images have provided such startling evidence in variation, with South Korea being technologically advantageous yet North Korea has not developed at all.


This reading relates to Southeast Asian experiences, especially one of the Vietnamese community because they too are selective of which part of history they want to remember and this oftentimes depend on geographical factors. For example, in Vietnam Ho Chi Minh is recognized as a hero and a savior however, those who have fled Vietnam during the 1970s think of him as the complete opposite. There is this constant re narration of history in order to present something that is best in cosmetic form. This brings upon confusion within communities, and my question is what is the best way to get the best information? How do we know which one is correct or not?


Question: With South Korea’s economy and tourism being heavily invested in the entertainment industry known as the Hallyu Wave, how stable is such an economy? 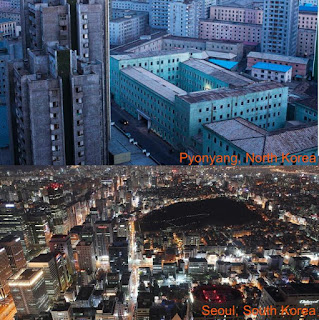