Nothing Ever Dies: Vietnam and the Memory of War by Viet Thanh Nguyen brought about many topics that I never even thought about as a Vietnamese American. This was not my first time reading Nguyen’s work because I loved his book The Sympathizer, which I read for another ASA class. I genuinely appreciated his writing because seeing a Vietnamese American author be recognized today is not something you see every day. Representation is important, and he gives me hope in my aspirations to be a writer one day. When he brought about the Korean involvement in the Vietnam War, I was genuinely confused because I never knew that they played any role. Again, the United States flaunts its capitalistic and democratic ideals to other countries when they had no right to do so. The theme for this week was “Forgotten, Suppressed, Invisible Histories” and it was obvious to me that I have clearly been kept in the dark about the Vietnam War and the many sides that it holds.
One of the quotes that hit hard for me was when he stated, “Vietnam has most of Korea’s problems but only a measure of its success” (Nguyen, 134). With U.S. intervention in other country’s affairs, it is unfortunate to realize that the U.S. does not do enough to fix the suffering that it causes. There was a documentary (the title has forsaken my memory) that I watched about Asian immigrants that come to the U.S., and I realize that nowadays, many people do not like the idea of immigrants “infiltrating” and “taking over” without realizing the history of these peoples. In that documentary, one of the Asian American teenagers had said, “We [Asian families] are here [in the U.S.], because they [U.S. soldiers and involvement] were there [in our countries.”
In regards to learning about the war in Vietnam, I remember Professor Valverde stating that there are still some people in Vietnam that know next to nothing about the truths of the war. They think that people left America just for better opportunities, without learning about how the U.S. screwed them over and caused them to become refugees. The idea that Vietnamese American literature is slowly avoiding the topic of the war is sad because we need to know our history for it not to repeat itself (213). This reading opened my eyes a lot, and Viet Thanh Nguyen did not disappoint.

Question: What can we do to make these stories visible as students in a public institution, like UC Davis? How do we destroy stereotypes about Asian Americans as allies or as people within the community? 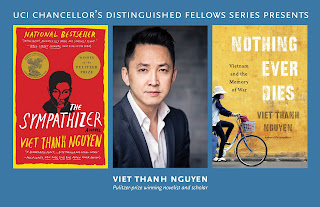