In 1971 may GIs against war produced papers against fighting. In April decorated veterans came to Washington to return their medals ad ribbons. They all had received honorable discharge and had come to make a statement. They threw their purple hearts and Bronze Stars over a barricade made to block them and let them fall on the steps of congress. 110 of them were arrested when they sat in protest on the steps of the Supreme Court and put their hands on their heads just like the Vietnamese had to do when taken captive. Groups of young veterans in masses spoke out against the war testifying to what they and others had done  (Tures 235).

They explained how they would beat people up without making it look invasive (Tures 236.) They felt disenfranchised going off to war with visions of glory and was nastier than they had expected it to be. The Vietnam Veterans Against the War would carry out mock search and destroy missions handing out flyers of what could have been done to those in the mall if they had been Vietnamese.

When looking up images, I was interested to find another event similar to this when the veterans also threw their medals in protest with the government. This was in response to the Iraq war a few years back but it shows the same suborn or strong opinion seen in some other young students. Because the photographer decided to use a grey filter the picture looks older than it is. The bill board in the back of the eventually it probably was the main thing that gave the picture game while talking to her. It is good to see peaceful protest, however it is also intimidated  to advocate for rights more often.

Question, would you be willing to throw to get lawmakers attention? 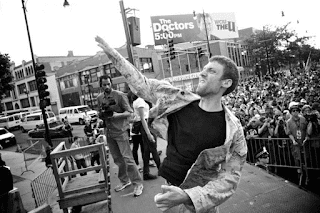