Nick Turse’s Kill Anything That Moves: The Real American War in Vietnam does a great job at rebuilding the narratives surrounding the Vietnam War from its original perspective of a “noble cause” to a series of buried war crimes and mass civilian suffering. This would essentially allow for Southeast Asian folks to understand that their history is richer and deeper than what they have been told growing up, which in hopes, would allow them to control their narratives and allow them to tell stories how they are meant to be told.


One of the rather interesting points came about occurred in Chapter 2, titled “A System of Suffering,” as Turse states, “[Robert McNamara] relied on numbers to convey reality and like a machine, processed whatever information he was given with exceptional speed, making instant choices and not worrying that such rapid-fire decision making might lead to grave mistakes” (Turse, 2013, p. 42). The data gathered during the war contributed to over 3.8 million war deaths, over half belonging to civilian casualties, in comparison to what America reported as only 1.7 million (Turse, 2013, p. 11).

Data has become an important part in a lot of aspects of life, but even with data telling us certain outcomes or providing us with information to make informed decisions. Data can also be hidden or under/overexaggerated. It gets to a point where what data can we really trust? Also, data still tends to be ignored to meet certain expectations of particular individuals, much like the recent news regarding Trump v. Iran. It appears that regardless of what data states, as long as a sliver of that data supports a person’s agenda, it is more than enough to be the driving force of certain operations.


Discussion Question: Knowing what we know now about the Vietnam War, to a certain degree wouldn’t this be classified as a genocide, considering the amount of civilian casualties occured during the time of the war? 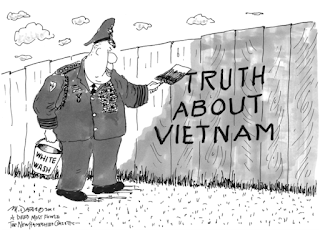 Source: Turse, Nick. Kill Anything That Moves: the Real American War in Vietnam. A Metropolitan Book, 2014.
Posted by Unknown at 10:58 PM