War crimes. According to Wikipedia (2020), “a war crime is an act that constitutes a serious violation of the laws of war that gives rise to individual criminal responsibility.” I find the definition of war crime to be petty and ironic, considering how do you essentially say that any killing, harm or event in war is a crime. Isn’t taking the life, the bombing or killing or another a crime? So how does one set apart war crimes from war? Who is to say one violation is above another. Are we essentially defining “war crime” as war? I believe that war is a serious violation of any human rights and to say that there are laws that govern that one act is more serious or heinous than the other, it is ethically and morally encumbersome.

Nick Turse tells the tale of a horrific massacre in My Lai and how the onslaught was kept secret and hidden from society, until a brave young man spoke up. Essentially, a “whistleblower,” shedding light on the crimes, the unethical actions and events that took place behind closed doors. The sickening, sad, and disturbing part of this ordeal as Nick Turse goes on to depict is how over time, documentation of American war crimes went “missing,” in other words, it was depicted to “never have happened.” As a healthcare professional where my career is imposed on the concept, “if it’s not documented, it’s not done,” it just goes to show that this view and concept is parallel in all aspects of society. Therefore, to have “missing” or “no documentation” of such events taking place, we are essentially saying, “it never happened.”

Another interesting fact that Turse pointed out on was the extreme efforts that took place to expose the series of events take took place during this unfortunate time in history and how laws and judicial systems are currently set in place to prevent such events/actions from occurring again. However, here we are again. We have a judicial system set in place to prevent “war crimes” from occurring yet time and time again, we’ll have a president or person of power pardon such events. In November of 2019, President Trump used his Executive Clemency powers to pardon Army 1st Lt. Clint Lorance, Major Matt Folsteyn and even restore chief petty officer rank SEAL Eddie Gallagher of war crimes (Cox, 2019). Many military, judicial, academic and law enforcers are now at a crossroad again, questioning, what defines war crimes, and how do we handle them when you have the “commander in chief” breathing down your neck telling you that it was not a crime and it did not happen and we need to accept the pardon was that was given by the president. 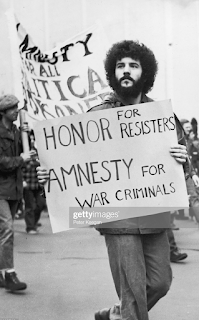 Image: Protesters in a march marking the end of the Vietnam War carrying signs urging an amnesty for deserters and draft dodgers. (Photo by Peter Keegan/Getty Images)

Turse, N. (2013). Kill anything that moves: The real American war in Vietnam: Macmillan.