In the chapter titled, “Military Women,” from the book titled, South Vietnamese Soldiers, author Nathalie Huynh Chau Nguyen shares suppressed narratives regarding Vietnamese women involvement in the war. Naturally, war narratives are dominated from a patriarchal point of view and mentions mainly male heroes. Nguyen reinforces this argument when she states, “Although thousands of women served in the RVNAF and some had military careers stretching for twenty five years from 1950 to 1975, historians of the war have remained largely silent on their participation” (Nguyen, p. 89).

America naturally tends glorify war narratives by celebrating them, recalling them in history books and movies, but also have a natural tendency to leave things out in order to benefit their own agendas. By mentioning their involvement, Nguyen not only attempts to turn around those narratives, but allows for the celebration and restructuring of how society collectively views women. Specifically regarding restructuring the worldview of Asian women, sharing these narratives reshapes the worldview from a sexist state of mind like a lack of leadership and initiative, to contributing to something important and showcasing bravery that isn’t instinctively thought of when referring to Asian women.

Overall, sharing these narratives are important to counteract the worldview of Asian women and to provide more transparency of their contributions, allowing folks to understand that women are an essential part of history’s most discussed moments.

Question: Does marketability play a large role as to what narratives becomes more widely known following war? For example, because women appear to be limited to jobs that involve nurturing and hospitality, it's not shared because they’re not “extravagant or uncommon” in comparison to bombing stories or assassinations of big political figures? 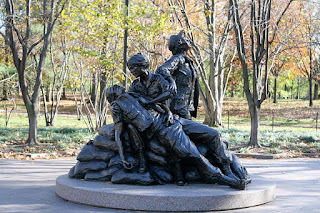