Like anything else corporate run, I find military perspectives tend to be a bit dry and boring. The details of war battles and death statistics never really bothered me, unfortunately, because it never really resonated with my emotions. Chapter 4, titled "Friendship and Sacrifice", interests me more because it speaks less of dry numbers, and more of authentic human connection under tragic circumstances. Despite the politics behind U.S. involvement, once soldiers were on Vietnam soil, staying alive and relationships that kept them sane were more important. Similar backgrounds helped facilitate friendships and The impact of a soldier's life reaches beyond his enemies. His spouse, friends, family members, and acquaintances are all impacted by their presence and reason for their deployment. When a soldier dies, it is on the soldier's squad member to send news to his wife and family back home. Similarly, where a soldier's loved one dies, it is on the squad members to keep their spirits up and keep them from falling into a pit of despair, especially in the heat of battle. Women, were and are an underrated and integral source in the military force. They do everything else besides go into battle. What can the U.S. and soldiers do to fully appreciate women as a work force in the military? 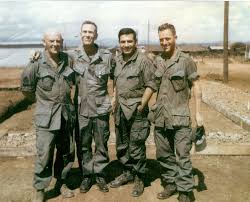