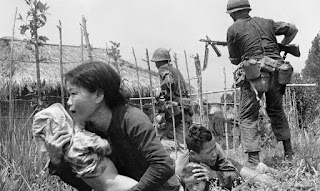 The second week reading "South Vietnamese Soldiers" focused on the voices that are often overlooked by us. The content of Chapter 4 emphasizes the military woman, who not only assumes the role of the soldier but also has responsibilities such as mother and wife.  In Chapter 5, the soldier's emotions and connections are described. For example, An was forced into the army,  then escape to Australia, he was still looking for his comrades in 2001. An described the friendship and sacrifice between him and Tu. As described by An, An hoped to let more people know that some soldiers paid in obscurity. Some of them even the corpse could not be find，and some families spend decades searching. In fact, most of our generation has not experienced war, and many times we only know numbers or stories, ignoring the millions of families behind each number. This is the most terrible place of war. For soldiers and their families or friends, the end of war is not the end of pain.
Question: How can we commemorate their sacrifice? Can we use these soldier's descriptions to be added to basic education?

“Under sniper fire, a Vietnamese woman carries a child to safety as U.S. marines storm the village of My Son, near Da Nang, searching for Vietcong insurgents, April 25, 1965. | Eddie Adams / AP”
Link：https://www.peoplesworld.org/article/lessons-not-learned-the-vietnamese-experience-in-the-vietnam-war/