Week Two – Military and Conservative Perspectives
In Nguyen’s “South Vietnamese Soldiers: Memories of the Vietnam War and After”, Nguyen is able to broaden the perspectives of the Vietnam War to the common narrative that Americans are often giving, that of American soldiers and much more. Incorporating the experiences that South Vietnamese soldiers and even soldiers that were women gives a more holistic view of the war to where we get to see that the Vietnam War was more beyond that the common label of it being the first loss or a mistake. Nguyen satisfies these perspectives by reassuring that by the end of the day, these people on the frontline are humans that are alike of one another – she uses her ability to humanize them and their experiences, and in short, validate them.
In relation to the theme discussed this week, which is “Our Past Is Our Present”, coincidentally slightly parallel to the title of the piece, I feel like the significance would be that though these events have had happened in the past few decades, its effects in the form of trauma and loss are still in effect today through intergenerational trauma, and within other forms as well. To interpret the theme in a different way and put it in today’s context, I feel like the actions of the United States is a replica of that of our past – Our Past Is Our Present. A lot can be learned based off of the United States’ previous wars, one which we are discussing, the Vietnam War; however, to this day, such wars such as the one happening in Iran right now are happening.
I believe that exposure such as what Nguyen is demonstrating through her piece is essential to open and offer perspectives to that of the general public, to give a voice to those who are not or who have not been recognized as significant contributors and people in the war.
I want to bring the theme "Our Past Is Our Present" to life. In what ways could we use the voices of those who played a significant role in the past to contribute to the events happening to today's day and age (today's trajectory)? 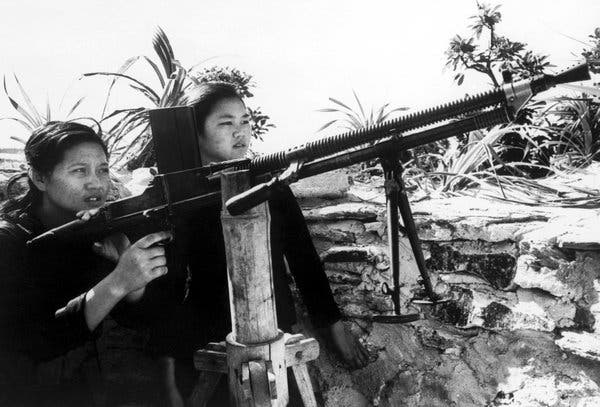 Opinion | The Women Who Fought for Hanoi - The New York Times
https://www.nytimes.com/2017/06/06/opinion/vietnam-war-women-soldiers.html