The reading for week three consisted of showing the truth about what happened in 1968 during the My Lai Massacre. It was basically mass murder committed by U.S. troops and we do not see it written into history books and taught about in U.S. schools when learning about the Vietnam War. This is due to the narrative that the U.S. wants to continue to push about its troops. To admit and teach the public about the crimes and injustice committed by those who are supposed to stand against these things would be too dangerous for the U.S. This system wants people to trust those in power and will push an agenda and conceal truth in order to create this image of the "good warrior" taught during week one. It breaks my heart to learn about all of the terrible things those men had done to innocent Vietnamese people. It is disgusting that so many had taken part in murdering and rape and were still able to go eat a meal after and sleep at night.

A major issue in the SEA community that relates to the readings I feel like is how a lot of the issues such as poverty, mental health, and other issues being faced within the communities are not well-known by the general public in the U.S. just like how the massacre is not well-known. The purpose of this is because the U.S. does not care to highlight issues faced in marginalized communities because it does not help their narrative of being the "saviors" of them. Overall, it is not good to try and continuously push issues aside and not bring them to light because it creates a snowball effect where it only gets worse and worse. The theme for this upcoming week relates to the readings because the excerpts we read are from that "liberal academic perspective" where it fails to mention the contributions given by the Vietnamese veterans and their perspectives. I also feel like from these excerpts they should have mentioned policies that allowed injustice and murder also. This perspective can be good, but definitely can be too scoped towards individual issues.

My question for this reading is to what length will the U.S. government go to hiding their crimes and why do they feel like this is necessary when people are eventually going to find out anyway? Also, why is the U.S. able to continuously commit crimes and never offer much reparation or even an apology? 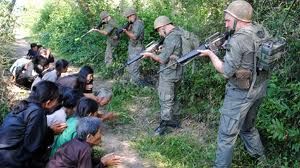