Jennifer Nguyen Bernal
Professor Valverde
ASA 150E
In Kill Anything that Moves: The Real American War in Vietnam by Nick Turse explains that in the 1960s, America had this idea of "tech war" that the Vietnam war should combine American technology and economic prowess. They believe that it would guarantee success on the field and that they can do this anywhere in the world from 1961 to 1968  against the Germans and Japanese. In the Vietnam War, they focus on the " crossover point," in which American soldiers killed more enemies than the Vietnamese, and the Pentagon was keeping track of the body count. War managers in the United States were not about the Vietnamese corpses or even the civilians. According to McNamara, the body count can "measure the level of success." American officers need to prove themselves that they can have a high body count to succeed. If they don't, they are looked down upon and never have promotions. I imagine how this standard to manage can do much damage to a young soldier at war. It was just shocking to see that they have killboards that are " Box scores" to keep track of how many Vietnamese they have killed. When the American soldiers kill civilians, those they have killed are called the " Viet Cong."  According to President Nixion, Vietnam is a "backward nation." The idea of orientalism still played a role in how they view Asia, which the East in the past, and they do not believe in life. War crimes explain how the West's idea of orientalism, like how Lieutenant Calley charged of killing 109 "oriental human beings."The view of the Vietnam War for America still objective the Vietnamese civilians.   America had other strategies and did not succeed, which lead them to do "search and destroy." Vietnamese civilians who survived and were injury accused of "running from the United States." When America accused Vietnamese civilians of running away did not make sense to me since people should know that they were trying to escape these attacks to survive. Around 1968, Vietnamese civilians killed in the fire free zone since that America claimed that it was a Communist area. Their idea was to attack these fire-free zone areas so that the Vietnamese civilians would move to these refugee camps. The attack at the sites allows Americans to have controlled under them since they have power at the refugee camps. The refugees' camps were concentration camps. Nick Turse explains the suffering of Vietnamese civilians facing America by labeling civilians " Viet Cong" and the strategies to kill them.
What happened to the idea that war should not involve innocent civilians and the killing of people like women and children?
Nguyen, Chau Huynh Nathalie. South Vietnamese Soldiers: Memories of the VietnamWar and After. 2016. 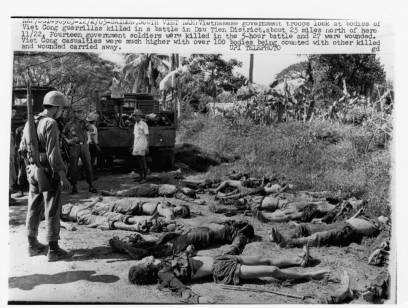