In her book Radicals on the Road, Judy Tzu-Chun Wu discusses female involvement in international conferences to battle against oppression from the patriarchy, underscoring the devastations unleashed during the war and rallying women together in a grand union of sisterhood. These women and their actions challenged the female stereotype, pushing forward the notion of strong heroism, fighting for their rights and beliefs. They formed an alliance, seeking common ground to build camaraderie against the ultimate goal of saving the oppressed. This emphasized the narratives of women during the war, revealing the struggles they faced while most of the spotlight shone on the men. Their voices went unheard, but these conferences empowered them, calling attention to their suffering and injustices. However, these conferences remain largely unknown.

Not many people were even aware of this movement. I didn’t realize these alliances were even an aspect of the Vietnam War. And yet, it’s not surprising that their actions weren’t given as much publicity as say, the veterans. Minority groups are often pushed aside, ignored in the face of the dominant one. To this day, women are still ranked lower than men.

How then do we ensure the narratives of the oppressed are heard? How do we bridge the gap between men and women and lessen the inequality? 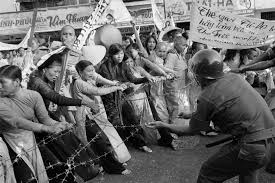 Source: Wu, Judy Tzu-Chun. Radicals on the Road: Internationalism, Orientalism, and Feminism during the Vietnam Era. Cornell University Press, 2013.
Posted by Unknown at 4:23 AM