In Radicals on the Road, Judy Tzu-Chun Wu tells the journeys of various women who traveled internationally to highlight the atrocities of war and to collaborate to fight against male oppression among women. Wu highlights how the role of women changes politically and socially as women fight and advocate for world peace and shed light on women’s oppression in society. The networking and sisterhood that developed to fight for women’s rights shed light on issues that many are facing, yet interestingly some issues remained sensitive to address such as the concept of homosexuality.

It is interesting how Wu talks about the Southeast Asian delegates in this book. Most often times, Asian women are often seen as meek and docile, yet the women in this book were painted as strong, independent martyrs fighting for their rights, beliefs and the welfare of others. I find this interesting in that in today’s politics and social issues, any woman, regardless of race or social stature are still continuing to fight for their basic human rights because men feel oblige to make decisions for women. The Women’s March is a result of women’s inability to obtain equal rights as women of color, differing sexual orientation and ability to care for themselves and their families.

An article written by Hilde Coffe (2019) from the Centre for Public Impact reported that the gender divide in politics hinders equal opportunities and inequalities in representation and policy outputs. In today’s politics, women are often found in political roles that are often dealing with social issues or committees that reflects the women’s social construction of being nurturing, people-oriented and familial. This is not because women tend to navigate to such roles, but rather it is because our political system is set up that political concerns with foreign affairs, employment, finance, business and economics are consider masculine politics, therefore the role of women in such committees is unnecessary.

Do you think there is such a thing as masculine politics? Is that why women are continuing to be oppressed today with health choices? (i.e. abortions) 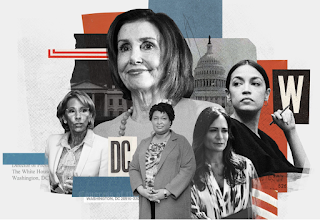 This image was published in September 24, 2019 in Fortune’s 25 most powerful women in politics. According to Fortune, there are more women than ever before serving in Congress and running for the nation’s highest office.

Do you think that these women are fighting and making a difference compared to their male counterparts?

Fortune. (2019). The 25 most powerful women in politics. Retrieved from https://fortune.com/longform/most-powerful-women-politics-2019/