The chapters of Nick Turse’s Kill Anything that Moves were eye-opening and shocking, as for example the My Lai massacre was something I had never heard of up until this point. These chapters serve the purpose in showcasing the truth behind technical jargon like “body count” and the ways that “enemy” bodies were perceived during the Vietnam War. There seems to some kind of forced amnesia with the soldiers that were there, whether they participated in the murders, rape, or simply witnessing, these were events of the war that had gotten swept under the rug. It is both appalling and unsurprising that this is how the United States has chosen to deal with its own mistakes, but Turse seeks to highlight the truth that lies beneath the hegemonic discourses. He uses conversations he has shared with officers to parse out the truth behind what happened overseas and highlights the inconsistencies within certain reports, and even has a chapter as to how this need to rack up such a large body count comes to be. Horrifically enough, this need for a large body count comes from conditioned training of combat training; it instills a need to kill as many as possible, even if it means killing children… as the title suggests, combat training suggested killing anything and everything that moved, no matter the cost.

The image I’ve attached is of women and children in fear for their lives—these were a large number of the victims at the hands of American soldiers. It’s uncomfortable, but a harsh reality we all needed to hear when thinking of this war. 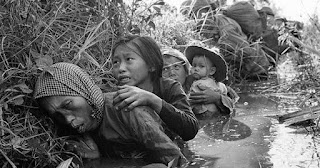 Image Used
https://www.commondreams.org/views/2017/09/24/there-no-rehabilitating-vietnam-war
Posted by Unknown at 1:09 AM