The reading for week two focused mainly on specific narratives from people who were frontline in the war, but are not well-known due to the U.S. narrative we learned about last week that mainly just focused on the American soldier. I believe that since these chapters focused on giving a voice to those who are not typically heard, that this relates to the larger issue the Southeast Asian American community faces with not having their voices, experiences, and history heard. Little do we ever see ourselves properly represented in media. Little do we ever hear or share our struggles and difficulties. And little do we ever feel completely confident that our experiences and view of our history as valid and something worth listening to. Our community has been silenced, overshadowed, and pushed aside by the "model minority" belief. It is so important that our voices are uplifted and heard because what we have to say is just as important as what every other group has to say. This relates in part to the introduction mentioning how important oral history is because it includes the perspectives and experiences of people who may never be known if their voices are not transcribed into books to be read forever (Nguyen 12).

The theme for week two is, "Military and Conservative Perspectives", which relates to the reading because the chapters focused on giving first-hand accounts from those who were within the war and military that are not typically heard of. The U.S. history of the Vietnam War does not serve to give voices to those who suffered and experienced it if it wasn't a white American soldier. In regards to the conservative perspectives part of the theme, from my basic definition of what conservative means, I believe the readings contain some perspectives that are considered upholding tradition. I feel like the reading currently relates to how little we know about those being directly affected in the current wars we are facing in the Middle East. If American soldiers die, we are the first to know about that and the numbers will be plastered everywhere on the news. Yet, so many innocent people are dying that are within and part of those countries, but we do not see those death numbers on the news. We have become so censored from being able to see the actual death and destruction the U.S. has caused. Lastly, how do we demand that we are provided with more truth in regards to what is going on overseas currently? How do we get more stories and hear more about the innocent people in those countries that are facing very dangerous situations daily? Will doing this cause people to become very upset, so the U.S. makes sure to censor a lot of what is going on? 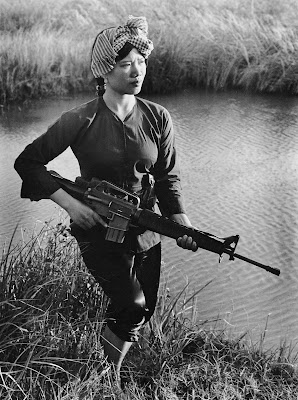 Sources used in body of text: Nguyen, Nathalie Huynh Chau. South Vietnamese Soldiers: Memories of the Vietnam War and After. Praeger, an Imprint of ABC-CLIO, LLC, 2016.
Posted by Unknown at 1:54 AM