In Chapter 8 of  “War at a Peace Conference”, the reading highlights the conflicts and differences that arise when organizing large scale socio-political conferences. The reading describes the difficulties of planning the Indochinese Women’s Conference (IWC), which took place in Vancouver and Toronto in 1971 to facilitate open dialogue and political unity among North American and Southeast Asian women. They experienced structural and organization issues, which arose because of the various co-sponsors and their different agendas. The co-sponsors involved were maternalist peace activists, Women’s Liberation (WL) activists, Voice of Women (VOW), Women Strike for Peace (WSP), and Third World Women. WL was determined to make the conference as inclusive as possible, especially because previous international delegations were not. These groups were somewhat divided as the organizations collaborated and discussed the conference separately (and they were widespread across the west and east coast in the United States). Third World Women were initially not part of the organizing process, and this led them to demand time in the conference schedule to engage with the Indochinese delegates autonomously. I thought this was interesting because it made me wonder what the point of this conference was if people were going to be separated. A major flaw of the conference was the lack of unity among Third World Women, Canadian women, and American women. Canadian organizers felt a sense of entitlement from American organizers, and the American organizers did not want to challenge the efforts of Third World Women because some were afflicted with white “guilt”. It shows the lack of dialogue and understanding even among North Americans, let alone across the Pacific.

Question: How can we organize international socio-political conferences in a way that unifies people? 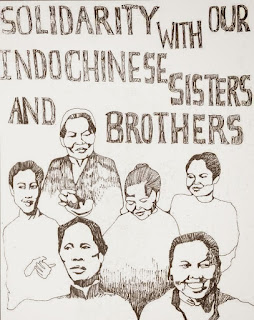