In Radicals on the Road: Internationalism, Orientalism, and Feminism during the Vietnam War, Judy Tzu-Chun Wu provides the reader a transnational perspective on peace activism. Throughout the chapters of the book, she examines the transnational dialogues created by American peace activists who traveled to Southeast Asian before and during the Vietnam War as well as organized conferences. As a result of these dialogues, peace activists, radicals, and feminists developed or strengthened their critiques of the American policies in Vietnam and of American society in general. Wu argues that these individuals shaped the era’s significant events in ways not captured by existing accounts. Wu explore further on the activists’ travels and highlight  their different experiences due to their gender, race, ethnicity, and nationality. Wu states, “I also explore how men and women of varying racial an ethnic backgrounds worked together and separately to critique American foreign policies in Asia”. The U.S. anti war movement against the Vietnam War was dominated by men, particularly white men. However, in the late 1960s, there was an emergence of feminst scholars who led the women’s liberation movement. Together, these women attempted to create an international peace movement based on a global sense of sisterhood. Overall, these factors influenced their understanding and reactions to the events they were witnessing in Vietnam.


How can we shine the light on the Vietnamese women experiences during this time?


Judy Tzu-Chun Wu, “Radicals on the Road: Internationalism, Orientalism, and Feminism during the Vietnam War” 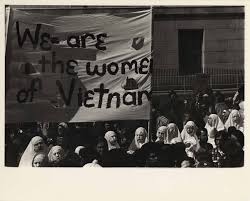