Week One – Our Past Is Our Present
For this week’s reading, I wanted to focus on the sixth chapter, “Refugee Postmemories: ‘The Generation After’”, which discusses the narratives that second-generation Southeast Asian American immigrants and further generations following face. In this chapter, there were discussions of the issues that in which are faced in these generations such as the overlining of the false narrative that is painted upon these people. What was mentioned were the dominant narratives were given by perspectives that of the United States which translates to problems that are covered or developed like poverty in Southeast Asian communities, further generations not understanding their identity, and the authentic definition of the Vietnam War. To keep it short, the intergenerational gap between first-generation immigrants and later generations are developed.
Relating this back to my personal experience with this in the real world, I too was told in classrooms that the Vietnam War was essentially the United States’ first lost and the war seemed to portray the Americans as the good people for bringing in Vietnamese refugees when in reality, these communities are left to work twice as hard on their own in low-income backgrounds – I myself identify as a low-income, first-generation student. There were many stories growing up that my parents would tell me that may have contradicted what was mentioned in discussions in classrooms or that of the textbook – the Southeast Asian/first-hand experience. These narratives are often left out, even though these narratives are ones that were from those directly affected.
To reverse these dominant narratives in my community, I created a VSA (Vietnamese Student Association) club at my high school during my senior year to help students connect with the culture that they are not closely connected with or that of which has been underrepresented and lost. I think it is important for such people to be recognized rather than trampled on by narratives that we are forced to drive by. Through the club, I’ve encouraged students to embrace their identity through food, dance (such as lion and fan dancing), and fashion (with ao dais). Personally, through the development of my club, I felt like I was able to sprout a new understanding of a community that was underrepresented that of the Vietnamese population. I made this club to make our people and stories heard, rather than be covered by the perceptions of the “Vietnam War”, because we are so much more than that. That is how I have brought the past to our present in cultivating that universal cultural understanding.
Question: I feel like as Southeast Asian American generations continue on in the United States as time goes on, their cultural understanding of their ethnic countries will slowly fade away. My interest in that of the intergenerational culture gaps that exist and will continue to widen as time goes on. What ways can we preserve that – or will there slowly be a redefined definition in the future for what it means to be Southeast Asian (American) in the future, suggesting their narratives? 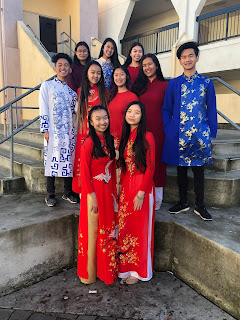