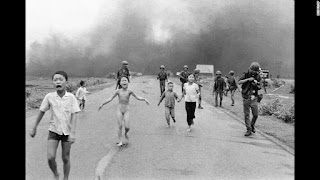 Week1
ASA150E
In this week's reading  "Body Counts: The Vietnam War and Militarized Refugees", the author mentioned some of the American media‘s definition of the Vietnam War. These media beautifying the justice of the war through the description of  "The Good Warriors" and the "Good Refugee". This has led to different perceptions of this war among Vietnamese Americans of different generations. At the same time, it has misled many Americans, especially white people. Many Americans ignore the damage the war has done to Vietnam and the plight of the first generation of Vietnamese Americans. Therefore at that time, US media propaganda caused Vietnamese Americans or Asian Americans to suffer more unfair treatment in the United States.
As the author mentioned, young Vietnamese Americans know the war through their family's direct experience and recollection of the war, but the silence prevailing in refugee families.
Recently, through the deterioration of the conflict between the United States and Iran, I have seen different analyses and descriptions of this matter by the American and Asian media. This fully reflects the prejudice of the media and cannot be neutral.
In fact, as an international student, I am curious about American history education. Especially about the textbook for middle school or high school in the United States, does the textbook include the Vietnam War? And how does the textbook describe the Vietnam War?

Photo Link：https://www.cnn.com/2014/06/20/us/vietnam-war-five-things/index.html
“Associated Press photographer Nick Ut photographed terrified children running from the site of a Vietnam napalm attack in 1972. A South Vietnamese plane accidentally dropped napalm on its own troops and Civilians. Nine-year-old Kim Phuc, center, ripped off her burning clothes while she ran. The image communicated the horrors of the war and contributed to the growing U.S. anti-war sentiment. After taking the photograph, Ut took the children to a Saigon hospital”
Posted by Unknown at 8:10 PM