The introduction of the book reminded me of the lack of humanity that is associated with war. It is heartbreaking to see officers and generals committing such heinous actions at My Lai against innocent Vietnamese, yet they were rarely punished due to their connections to the president. Chapter 2 emphasizes against the lack of concern the army had with the lives they were taking since the idea of body counts were seen as a competitive race against one another. How they were rewarded with R&R time for having high body counts reminds me of the way police officers today are treated after shooting innocent African Americans. Although not exactly the same, the officers are still “rewarded” through paid-time-off and there is no serious punishment that comes with their inhumane behavior. Just like the Vietnam War created a system of suffering, contemporary conditions in America today create similar environments were the unjustifiable killing of innocent people are given any serious judgment or consequences. As for chapter 7, the My Lai incident was eventually covered in magazines and news articles and even led to young veterans speaking out against their own government, but the government was too powerful and successful in covering up their tracks yet again. Again, I have never personally learned about this part of America’s dark history. The violence and trauma Vietnamese faced and still have to face due to America’s attempt at colonization is disheartening and makes me ashamed to be labeled as an American. My question for this week would be, why do we spend years learning about Hitler when, as Americans, we have a history that is similar to his? If the point of learning history is to prevent the same thing from happening again, shouldn't we know about such disgraceful acts committed by our own government so the situation would never repeat itself again? 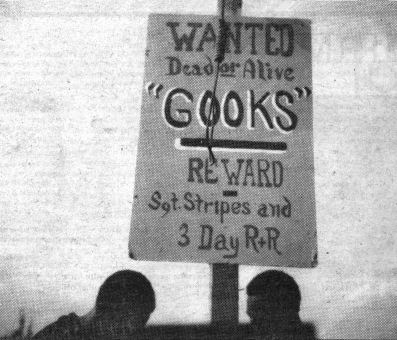