In Judy Tzu-Chun Wu's, "Radicals on the Road: Internationalism, Orientalism, and Feminism During the Vietnam Era,"  a key portion that struck me was the discussion of the Indochinese Women's Conference, often referred to as the IWCs. In 1971, the IWC served as a first opportunity for North American womxn to have "direct contact" with their "Asian 'sisters'". It quite literally was an experience that is perfectly incapsulated by the chapter's title, "We met the 'Enemy' - and They Are Our Sisters" because for many American womxn who attended, they had experiences which shifted their mindset to one summarized as such. A primary reason that this portion of the book really struck me was because womxn really pulled through for their fellow "sisters" and crossed international borders to fight and stand in solidarity to build an international antiwar movement whilst simultaneously building "global sisterhood".

To me, this is exceptionally empowering because it has a lot of relevance today. To this day, womxn are still fighting for their rights and are striving to come together in solidarity and unity to stand up against those who try to continue oppressing us. Additionally, the antiwar movement is extremely relevant as the U.S. is currently on the brink of war - as the war with Iran is currently a pressing issue, many antiwar movements are rising to express their disagreement with the consideration of war. As a result, it is really empowering to see that womxn from the past generation joined together to stand against issues that are presently still very relevant. However, it is also unfortunate to see that these are still such pressing issues to this day, even after several decades have passed since the first IWC.

Throughout reading Wu's piece, I found myself thinking about Professor Valverde's concept of "normalized suffering". Much of discussion in the IWC was centralized on the narrative of Vietnamese womxn who had to undergo immense suffering and make numerous sacrifices. Their narratives are extremely relevant and I believe it's important that they be discussed, however, I couldn't help but feel that their sufferings were being "normalized' like Professor explains. Additionally, when discussing the stories of different womxn from differing cultural backgrounds, it appears that their sufferings are normalized too. As a result, it makes me raise the question of how can we honor the hxstories and narratives of these womxn and their empowering international fight for antiwar movements without "belittling" their stories as a result of "normalizing their suffering" that they endured before, during, and after the movements?

Depicted is an image of "Triple Threat" that represents three pillars of womxn's organizations standing in solidarity. 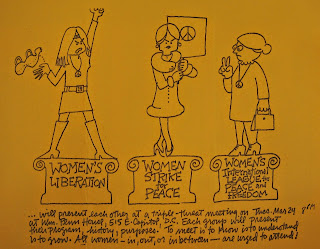