Out of all the lies that make up US history, the Vietnam War is one of the most persistent attempts to reframe the US status as a benevolent super power. In Body Counts, Yen Le Espiritu discusses how the story of the Vietnam war is reworked with every anniversary in order to paint America in a more positive light than they actually were. Narratives about the Vietnam War were twisted by supplanting the suffering of the Vietnamese people and country with stories of  (white) good warriors who lost their innocence and focusing on how America’s “gift of freedom” permitted the Vietnamese to soar and become the “model minority.”

The concept that sparked my interest the most was the concept in Chapter 4 described as the “would-have-beens.” Espiritu explains that this concept is one of the most powerful tools in airbrushing America’s image after the war arose from refugee internalization of the “gift of freedom.” With success story testimonials like: “‘If I were still in Vietnam, I wouldn’t have the businesses . . . . My children would not have succeeded. They would be working in the rice paddies,’” (112)  the US retains the image of the ultimate safe haven. It also forces Vietnamese refugees to consider themselves lucky even if many of them were financially unstable or emotionally scarred.

I was particularly interested in the idea of “would have been” because this debt of gratitude is a universal experience for all immigrants of color. This was a part of my parents’ daily reality when they would dare venture out to the chain grocery stores and be humiliated by how the employees made fun of their accents. Despite the shame and the insecurity, which often leaves scars of their own on the succeeding generation, immigrants are so wrapped up in the idea that life “would have been” more difficult in the motherland rather than questioning why life is so difficult and rising up to protest against it.

Is it possible for refugees to move past the immobilizing “would-have-been” stage in order to stand up for themselves and others against the American government? How do we begin to help them move past it? 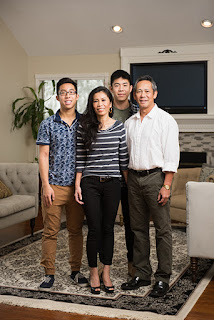