In her book South Vietnamese Soldiers: Memories of the Vietnam War and After, Nathalie Huynh Chau Nguyen explores the narratives of those on the frontlines, drawing attention to the voices of the forgotten. While the story of the White American soldier has a broad audience, many are ignorant of the other perspectives. More specifically, Nguyen delves into the lives of Vietnamese women who served in the war, participating in the fight while also fulfilling their roles as mothers. Their involvement in the war effort breaks traditional gender norms, subverting expectations of women staying home to care for the children while men fought in battle. They balanced maternal duties and national pride, both as a mother and as a citizen.

The United States primarily focuses on the experience of the standard White American soldier, underscoring their young age as boys who witnessed horrors abroad— never mind the African Americans and Mexicans who were drafted alongside them, unable to escape their fates, unlike the wealthy elite. Minorities and the underprivileged were forced to fight in a war, under the banner of a lie the country adopted.

Question: why are the efforts of women in the war left unspoken, along with other minorities? 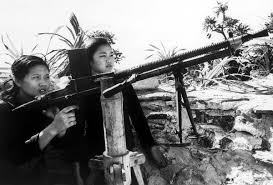