One of the key concepts in Viet Thanh Nguyen’s Nothing Ever Dies: Vietnam and the Memory of War was that there are still American influences in Korea after their involvement as allies with the United States during the Vietnam War. One of the key influential cultural aspects mentioned was the global phenomenon of K-pop. Although most Americans would associate it with Korean culture, many western concepts transmitted through a war radio station intended for an American audience. The name of the main radio station was AFKN, which was started to teach American soldiers about Korean culture while playing popular music from the United states. This station also reached Koreans and allowed them to gather sounds from the United States. Learning this style was not only interesting, but also allowed them to perform in shows that favored western audiences. The author writes that “Korean culture became the new cool” (Nguyen 132). In thinking of how this culture had been shaped by America’s involvement during their wars, I wondered if there was a similar culture assimilation in countries like Afghanistan. Apparently there is. During an interview by Sudarsan Raghavan a youth in Afgaistan, Mahmood Rezai, told them that he “loved gangsta rap” (Raghavan). This shows that as America music influenced the Koreans during the war, the United States also is influencing other countries that they have been at war with through culture.

Although music may seem harmless, labeling another’s culture as better or worse can be detrimental. What might be cultural music that you know of to be influenced by war with a rival nation? 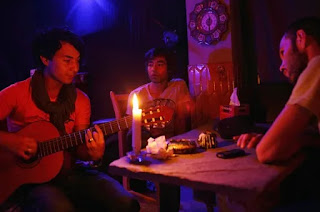 Nguyen, Viet Thanh. Nothing Ever Dies: Vietnam and the Memory of War. Harvard University Press, 2017.