The focus is now on the Southern Vietnamese soldiers as their involvement and role within the Viet Nam War changes on perspective. It can be focused on as their seen as allies fighting for rights and freedom, but it can also be seen as if they were “puppets” as the northern Vietnamese would describe it. We can recount the various types of perspectives given when it came to this war just because it has been so in deceivably written in ways in which most of us can never really understand. The ones involved in this crucial time had their own mindset of how overall their impact involvement would mean for them and those around them. What cannot be shown is that from an overall standpoint, no one really understood the means of the war and its overall complexity to the impact on Vietnam and the rest of the world. The question I have pertains to all of those involved, especially the hidden voices of it all. How did these soldiers come to terms with the end of the war and what did these mean for them now moving forward? It’s become a difficult question in which we can only wonder the deeper implications of what it means to be someone who fought for what they believed in versus what others had believed in. 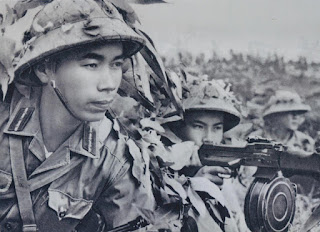 Citations:
Nguyen, Nathalie Huynh Chau. South Vietnamese Soldiers: Memories of the Vietnam War and After. Praeger, an Imprint of ABC-CLIO, LLC, 2016.
Posted by Unknown at 5:05 PM