Radicals on the Road: Internationalism, Orientalism, and Feminism During the Vietnam Era written by Judy Tzu-Chun Wu initially brings up her stories of traveling to Hanoi and brought up the notion of forming an “internationalist consciousness,” then later sharing some key figures that attended certain conferences.
In chapter 8, titled, “War at a Peace Conference,” one of the main points Wu brings up is the perception that these conferences encouraged inclusivity, but some folks’ testaments would suggest otherwise, as Wu states, “The differences concerning workshop content and security were particularly intense between women of color and WL activists… In turn, women of color criticized the manipulation that they perceived” (Wu, 2013, p. 228). Wu further states, “The women of color and the white women perceived one another as seeking to assert control and power” (Wu, 2013, p. 228). Overall, Wu is referring to the notion that these conferences seemed to narrate a one sided story rather that create an internationalist consciousness.
We still see this in certain spaces today, where there is simply a lack of understanding on all fronts simply because of their different upbringings. This specifically affects Southeast Asians in regards to the fact that their stories will continue to be inaccurately told in mainstream media, and until all sides are willing to understand that there are multiple truths, there will always be difficulties finding an internationalist consciousness. With the work being done today, like activism and ethnic studies, it can hopefully mitigate or close that gap as much as possible.
Questions: During the time which this novel is based off of, newspapers and controlling the press seemed to be the most effective way to get certain points across. Today, what is the best way to get points across, especially with the oversaturation of media outlets in order to gain a more stable internationalist consciousness? 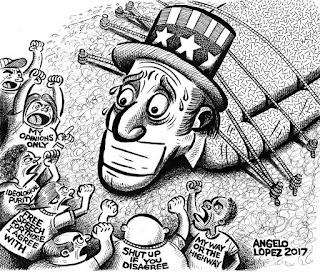 Source: Wu, Judy Tzu-Chun. Radicals on the Road: Internationalism, Orientalism, and Feminism during the Vietnam Era. Cornell University Press, 2013.
Posted by Unknown at 2:04 AM