This week's theme was "our past is our present" has given a perspective of the war that had ended 45 years ago, but can still remain present today in our identities. The readings from Yen Le Espiritu, Body Counts: The Vietnam War and Militarized Refugee exemplified the struggles of being Vietnamese American with little to no information of what actually occurred in the war and how that has played a role in their homes and identity. In chapter six she mentions, "As I detail below, the war appears to have no consistent meaning for young Vietnamese Americans; rather, it is a shifting specter that hovers over personal heartaches, family tensions and dissolution, and/or economic insecurities". The silence of the war in our history books and our own families have have burdening effects, "troubling patterns of gang membership, school drop-outs, relatively high rates of suicide, and intergenerational conflicts among Southeast Asian youth-concluded that 'the sense of not belonging and not knowing their roots intensified the identity crisis that normal adolescents experience'". The narrative the United States has painted of the war, calling it a true tragedy of battles won but the war being lost washed away the true meaning for the people who suffered the aftermath of it. People being displaced from their homes in hopes to find a "better life" eventually displayed their trauma in the next generation without even thinking of it.

My question is how do we open a dialogue with a generation who has been silenced their whole lives? A generation who is grateful for the U.S to open their country with unwelcome arms, giving an opportunity to work and start a family because if they stayed they would have been "working on the farms". The barrier of open communication has been present for decades, so how do we create a comfortable environment for them to unpack all the trauma and reflect on how it has affected them as a person and a parent?

The image I have chosen reminds me of my father who deeply sticks to his traditional roots of what his parents have taught him in Vietnam but claims America as a place who has given him opportunity to give his kids an opportunity. The land of freedom he will always be thankful for. 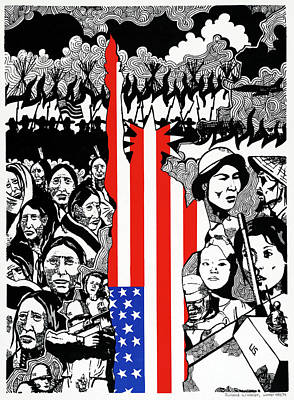