In current news and politics many speculate a possible war on the horizon. Many fear that the United States will spark an unwanted war with Iran. An unwanted war that will not only wage fear between countries, but unwanted death and destruction to the lives of many innocent people.

So, the question at hand is, why war? A controversial question that has no bounds, no rhyme or reason, yet historically it has occurred time and time again. For some, it was a quest for political gain, and for others, it was the need for territorial or economic gain. Meanwhile, religion, nationalism, and revenge can often spark outrage and war in search for peace and justice.

Yet does war really wage peace and justice between countries at war? Forty-five years ago, a war took place that displaced hundreds of thousands of people, killed millions and devastated a country with chemical warfare (Kassraie, 2019). A war that many agreed that the United States had no reason to partake. However, despite these ill feelings, how has the American history, politicians and society dealt with the aftermath? Well first off, Le Espiritu (2014) paints the perfect picture of exactly what happens after a war. In her book, Body Counts, Le Espiritu (2014) points out that refugees are often perceived to be associated with images of poverty and foreignness, trying to flee impoverished war-torn states. However, another aspect that Le Espiritu reflects on that many fails to do, is address the narrative of those impacted by the pre and post war. Narratives are powerful, yet only a select few are chosen to be remembered. Because 45 years later, the aftermath of the war continues to plague Southeast Asian communities with issues of mental health, post-traumatic stress disorder, poverty, and poor educational attainment (The Southeast Asia Resource Action Center: Fact Sheet, 2018). Why? All because, their narratives were ignored.

So, the question remains, does war wage peace? It appears that lessons remain to be learned from the Vietnam War, as the ripple effects of war not only impacts those involved, but continues to ripple through generations decades later. Decades later, where generations and countries continue to search for peace and a sense of belonging.

The image below is of Southeast Asian Americans still at war in the United States today. War from not belonging well after being in the United States for over 45 years. A war of not being accepted nor counted, impacting the lives and livelihood of millions of Southeast Asian Americans. Is this peace? Is this the peace that many waged wars over? No, this is the unspoken narrative Le Espiritu imparts on the ripple aftermath of war. Image is of activists from the Hmong, Lao, Khmer, Viet, and Mien communities in support of AB-1726, a California bill that proposed disaggregating demographic data within the Asian American community. 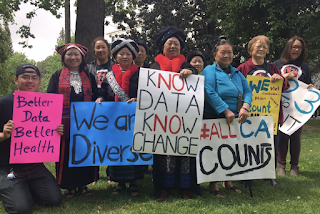