The Vietnam War refugee is more than a person, or group of persons. It was an image used as U.S. propaganda to overshadow the carnage of U.S. dealings in the Vietnam War. The U.S. can only benefit from a narrative where the U.S. is the pristine savior of anarchic, backwards thinking, Communist Southeast Asians, as opposed to wreaking havoc on the Vietnamese land in wartime. Similar to how the Minority Myth's purpose was to create a "good" minority who could succeed in America's harsh economic environment, the Vietnamese were promoted as "good refugees" who could live the American Dream. Lots of work was done on a widespread level by the government to ensure that any opposing ideas about Vietnam did not reach the surface. In effect, not only did they squashed any other idea that did not benefit the U.S. government, but they also blocked access to accurate Vietnamese and Vietnam War history in the process. How does this affect the children of Vietnam War refugees, especially the differences between the portrayed and non-fictional images of the Vietnam War? For them, the Vietnam War evokes more emotion than the mass-produced can of American pride can control. 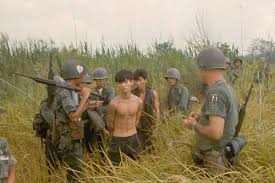