Through the U.S narrative of the war, lots of voices and perspectives have been lost in the process. Countless of lives that were devoted to protecting their families and serving their country were unheard of. This weeks theme of Military and Conservative perspectives has given me a new aspect of what the war was like for women. In South Vietnamese Soldiers: Memories of Vietnam War and After by Chau Nguyen she has given a voice of women in the military. The aftermath of the war left them "to reconstruct their lives as refugees in a new land in their early forties [...] their narratives are marked by loss and trauma [but] their service in the military provided a sense of structure and purpose to their lives". The only time I have seen women in the history of the Vietnam war (during high school) was only those of American women. Women who stayed behind and prayed for their husbands and country to make it safely from the tragic war the U.S was "assisting on". Or young college students on campus protesting for the safety of their loved ones. I have not seen a female veteran's perspective on the war, which was interesting to read and see how their lives played out after.

Throughout the reading the one thing that resonated with me the most was that while these women were fighting, it was during their early 20s. "As one said, they 'lost their youth'", as women in their early forties had to start over somewhere so foreign to them, greeted with "harassment by the postwar authorities, internment the strain of repeated efforts to escape their country and exile". Connecting this to the present, women now are still losing their youth in many different ways. Young women are forced to grow and mature in early ages in order to aid their families. First generation female college students are strained and stressed having to balance their academic loads while working to complete payments for school or rent. Many also play a huge part on raising their siblings due to the absence of their parents trying to produce a stable income for their futures. How are we going to be able to break these barriers of women not being able to live their youths in ways where they are able to work hard while still maintaining their own identities and own desires for other hobbies? Do we have to work extra harder now and sacrifice our youth so that are children (if we have any) will live comfortably and be able to experience their youth in maximum capacity?

I chose this photo because the women looks to be very young and the caption said "Vietnamese female solider. Pretty but dangerous" which is very interesting to state. 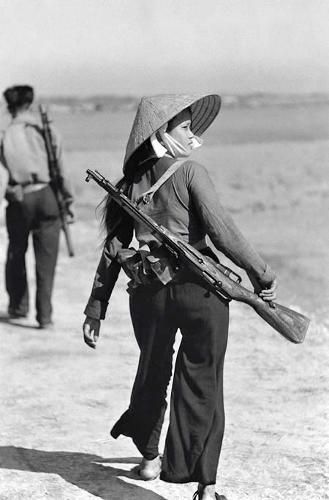